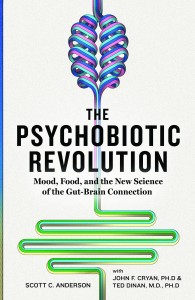 Can your gut microbes affect your mood? That preposterous theory has now been well demonstrated in animals, and more recently, humans. The microbes that chase the blues are called “psychobiotics”.

Through various avenues, your microbiota can communicate with your brain. If your microbiota gets out of balance, you can quickly become anxious. If you’ve ever suffered food poisoning, you know the feeling. This is called dysbiosis, and if you can’t shake it, you can end up with chronic inflammation and long-term depression.

“This is a book that you would reluctantly lend to friends, in the fear that they might not return it.”
— The Lancet

Learn how a sour gut works and how to fix it. With some unexpected suggestions, Anderson and his two brilliant coauthors, Cryan and Dinan, show readers how to address chronic inflammation and then how to support a happier psychobiotic microbiota.

Available at all major online bookstores:

Microbes surround us and suffuse us. We are seriously outnumbered. A single bacterium, given enough to eat, could multiply until its brethren reached the mass of the earth in just two days. That’s a big clue to their superpower: they are excellent at reproduction. They are also profligate interbreeders and think nothing of swapping genes with whoever is nearby. They are so promiscuous that biologists can’t even positively identify many of them. Their DNA is shot through with genes borrowed from other species—even other kingdoms of life. Dose them with antibiotics, and they may just depend on a passing virus to grab a handy antibiotic resistance gene. They can mutate every twenty minutes, while humans try to counterpunch with genetic evolutionary updates every ten-thousand years or so. They are genetic dynamos, running circles around us.

John Cryan with a thought-provoking TED talk about psychobiotics.