As defined by John Cryan and Ted Dinan:

“In 2013, we defined a psychobiotic as a live organism that, when ingested in adequate amounts, produces a health benefit in patients suffering from psychiatric illness. As a class of probiotic, these bacteria are capable of producing and delivering neuroactive substances such as gamma-aminobutyric acid and serotonin, which act on the brain-gut axis. Preclinical evaluation in rodents suggests that certain psychobiotics possess antidepressant or anxiety-reducing activity. Effects may be mediated via the vagus nerve, spinal cord, or neuroendocrine systems.[1] Recently we have suggested broadening the psychobiotic concept to include prebiotics—the fiber that acts as food for the psychobiotics.[2]” 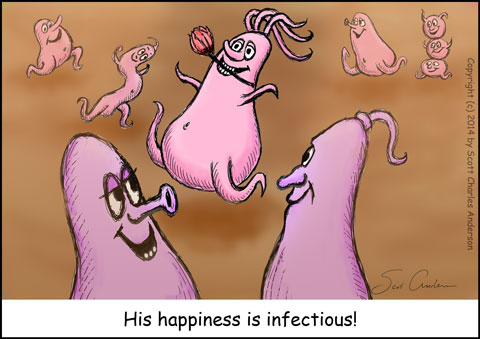 The 2017 Gut Microbiome Conference (held at the Hyatt Regency Huntington Beach Resort and Spa — tough duty) was a celebration of the gut microbiota. Held from September 16-17, John Cryan gave a well-received lecture on psychobiotics. He discussed the brain’s Geppetto: microbes as puppeteers of neural function and behavior.

Written by science journalist Scott C. Anderson and the two leading researchers in the field, John F. Cryan and Ted Dinan, this information-rich guide to improving your mood explains how gut health drives psychological well-being, and how depression and anxiety can be relieved by adjusting your gut bacteria.

This groundbreaking book explains the revolutionary new science of psychobiotics and the discovery that your brain health and state of mind are intimately connected to your microbiota, that three-pound population of microbes living inside your intestines. Anderson tells the amazing story of the brilliant Irish researchers John F. Cryan and Ted Dinan, explaining how common mental health problems, particularly depression and anxiety, can be improved by caring for the gut microbiota. Science is proving that a healthy gut means a healthy mind—and this book details the steps you can take to change your mood and improve your life by nurturing your microbiota.