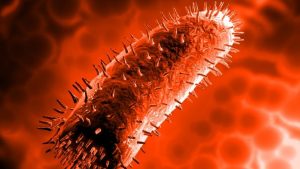 Rabies is an awful way to die. The bullet-shaped virus, which is transmitted by a bite from an infected animal, doesn’t move through your circulatory system like most pathogens. Instead, it travels exclusively through nerve cells. Unlike a blood vessel, nerve cells don’t pump fluid around. But they do have some flow, courtesy of protein transporters that travel back and forth along the nerve axons. Rabies viruses grab a ride from these transporters, doggedly hopping across synapses and traveling toward the brain. The outcome is dire for the victim, whose muscles will spasm as hallucinations set in and paralysis finally kills them. However, the propensity to travel along nerves makes rabies a wonderful scientific tool to track nerve networks.

This is how Diego V. Bohórquez discovered that intestines can directly sense what is happening in the gut and then can transfer that info to the brain. Using fluorescently tagged rabies vaccines, he was able to follow the neural path from cells lining the gut called enteroendocrine cells as they connected to the “second brain” surrounding the gut. That pathway offers as yet another way that bacteria in your gut can communicate with your brain. Along with the vagus nerve, hormones and immune reactions, this line of communication makes it easier to understand the gut-brain connection.

We know that bacteria can produce a number of neurotransmitters, including dopamine, serotonin and GABA, but this research now shows us how those chemicals can access the brain without needing to breach the blood-brain barrier. As more of these mechanisms come to light, the story of how psychobiotics work their magic becomes clearer every day.