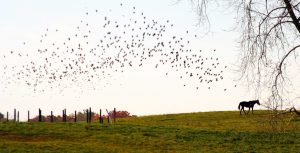 Do horses get depressed? What we found working with race horses brought us into the world of psychobiotics. Our minds are still reeling.

What race horses taught me about the gut-brain connection.

Check out the Podcast:

One of the most amazing facts to come from psychobiotic research is that microbes can produce neurotransmitters, the chemicals that nerve cells in our brain use to communicate. We humans think quite highly of our brain, so the idea that bacteria could usurp the highly evolved chemistry of that pinnacle of protoplasm is shocking. But the data continue to pour in.

You might assume that neurotransmitters, involved as they are with our magnificent brains, are complex molecules. But they are actually surprisingly simple chemicals that play a major role in all the kingdoms of life. No one is quite sure what good neurotransmitters do for bacteria, but they may act as signalling molecules similar to their job in brains. More enticingly, they may actually be trying to talk to us. The vagus nerve winds down from your brain and connects to all your major organs, including your gut. Are these neuro-enabled microbes attempting to communicate through the vagus nerve? And what are they trying to say?

A lot of the activity of psychobiotic microbes is pretty subtle, using hormones and cytokines, for instance. But using neurotransmitters is really grabbing the brain by its neurons. Are microbes attempting to control our behaviour? Do they squirt out a shot of GABA to make us feel better about eating foods they like?

This study introduces new techniques for discovering novel psychobiotics as well as demonstrating the tight co-dependencies that make microbiology difficult but exciting. We look forward to more studies like this that help us put a name to specific psychobiotics.

Researchers know that there is a strong relationship between gut microbes and mood. New research is confirming that storyline and even naming some of the main actors. In a large Flemish study of over one thousand people (that’s right, this is a human study), researchers correlated both depression and quality of life to specific bacteria. Notably, bacteria that produce butyrate were found to be associated with higher quality of life. Butyrate is a short-chain fatty acid that is like ambrosia for the cells lining the gut, and it has even been shown to stop some colon cancers.

They found three microbes, from the genera Faecalibacterium, Coprococcus and Dialister, that were all associated with better health and mood.

Better tools and larger studies are exactly what are needed to advance the field of psychobiotics, so we have a lot to thank the Flemish for!